Circuits capable of functioning at temperatures greater than 650 degrees fahrenheit

(Phys.org) —Engineering researchers at the University of Arkansas have designed integrated circuits that can survive at temperatures greater than 350 degrees Celsius – or roughly 660 degrees Fahrenheit. Their work, funded by the National Science Foundation, will improve the functioning of processors, drivers, controllers and other analog and digital circuits used in power electronics, automobiles and aerospace equipment – all of which must perform at high and often extreme temperatures. 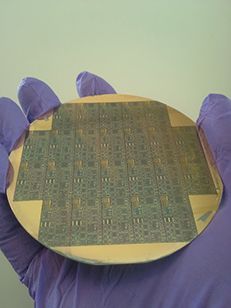 “This ruggedness allows these circuits to be placed in locations where standard silicon-based parts can’t survive,” said Alan Mantooth, Distinguished Professor. “The circuit blocks we designed contributed to superior performance of signal processing, controllers and driver circuitry. We are extremely excited about the results so far.”

The research is critical because one-third of all power produced in the United States passes through some kind of power electronic converter or motor drive before it reaches the end user. Circuits developed by the University of Arkansas team will enable tight integration of control in the tough environmental conditions these applications demand. They will also improve electrical efficiency while simultaneously reducing the overall size and complexity of these systems.

The researchers worked with silicon carbide, a semiconducting material that is more rugged than conventional materials used in electronics. Silicon carbide is able to withstand extremely high voltage and is a good thermal conductor, meaning it can operate at high temperatures without requiring extra equipment to remove heat.

The research team, led by Mantooth and Jia Di, professor of computer engineering, achieved the higher performance by combining silicon carbide with wide temperature design techniques. In the world of power electronics and integrated circuits, their work represents the first implementation of a number of fundamental analog, digital and mixed-signal blocks, such as a phase-locked loop using a complimentary-style silicon carbide technology. A phase-locked loop, or PLL, is a control system that generates an output signal whose phase is related to the phase of an input signal. Such a function is critical in a number of circuit applications such as signal synchronization, frequency synthesis, and modulation and demodulation schemes.

For more detail: Circuits capable of functioning at temperatures greater than 650 degrees fahrenheit

I belong to a village of Odisha, India where frequent power cut is very common. It hampers the life of...