The Radio Amateur Satellite Corporation, AMSAT, recently designated RadFxSat as AO-91 after its successful deployment from a Delta II rocket as a secondary payload to NASA’s JPSS-1. RadFxSat is the first of several AMSAT satellites which are flying a Maximum Power Point Tracker (MPPT) designed and built by Brent and I as a continuation of our Rochester Institute of Technology (RIT) senior design project. The story of the Fox-1 MPPT is a great example of how amateur radio is what you want it to be. 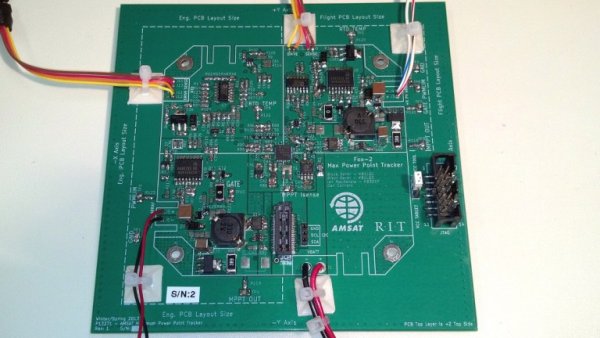 The MPPT symbolizes the vast nature of amateur radio which spans far beyond just communicating over the airwaves. The Maximum Power Point Tracker has no radio inside of it yet it is profoundly amateur radio. It’s sole purpose is to enable scientific and ham radio payloads on-board the spacecraft. Amateur radio is about learning, having fun, and applying technology to accomplish great things. Let’s explore this side of the hobby!

Let’s cover the basics first. A Maximum Power Point Tracker is an intermediate circuit placed between a solar panel and the load being powered. Solar panels produce the maximum amount of power at a specific voltage which varies with light irradiance as well as board temperature. The MPPT interfaces the solar panel with the load in such a way that the conditions for maximum power are always met when needed. In the case of RadFxSat the MPPT is temperature based since most of the change occurs with solar panel temperature and much smaller effects are created by irradiance from the Sun. Read the Fox-1 MPPT Technical Document if you are interested in the details of how the Fox-1 MPPT works.

It All Started at RIT

During the Dayton Ohio Hamfest in May 2012 Anthony Montiero, AA2TX, agreed to sponsor a senior design project for us during the next academic year at the Rochester Institute of Technology. Tony was the Vice President of AMSAT engineering at the time. He wanted us to design a new Maximum Power Point Tracker that could be used by AMSAT on future missions which were flying higher power radios and larger scientific payloads. The original intent was to fly this MPPT on a 3U cubesat named Fox-2.

The senior design team consisted of just four students: Ian Mackenzie (KB3OCF), Dan Corriero, Brenton Salmi (KB1LQD), and myself (KB1LQC). We had chosen to work together as we were all members of K2GXT, the RIT Amateur Radio Club, and had recently built and launched RITchie-1 (a high altitude balloon) together. We were guided by two Rochester, NY area engineers, Vincent Burolla and Leo Farnand, who had agreed to help us out and were obviously skeptical of the pure amount of work we had signed-up for. However, our team was motivated and ready for the challenge.