Have no fear… even if this project sounds complex, you’ll easily learn in this article many things about high speed electronics and PCBs.
In fact, my goal here is to teach you some basics about all the new problems that arise when you’re dealing with GHz signals

As you may have guessed, this is a work related project. Luckily, I didn’t need to understand the quantum physics experiment my colleagues wanted to make in order to build this board 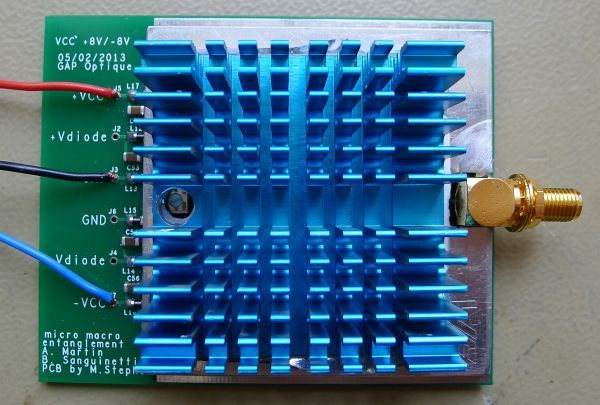 Anyway, to put things simply, this project consists in amplifying the measured light intensity difference between two photodiodes (both receiving less than nanosecond long pulses).
In my case, I chose to go for an operational amplifier (op-amp) based system (mainly for its ease of use), but FET based solutions would have worked as well (but they might have been more fragile).

First, a few things that we need to be aware of.
1) The output of a photodiode is a function of current. As we want the output of our amplifier to be a voltage, we actually need to make a transimpedence amplifier (alias a current to voltage amplifier).
2) Most high speed op-amp are using current feedback

instead of conventional voltage feedback. Therefore, their inputs impedance are lower.
3) Most of the characteristics of an op-amp will vary depending on the gain you set.
4) As we are dealing with pulses, the most important parameter of the op-amp you need to look at is its rise/fall time rather than its bandwidth.

You may ask: how can an op-amp have a “slower“ rise time than its 1/3*bandwidth?
Well my guess it that the fourrier transform of the fastest signal rise contains higher frequency components than ~3 times its rise/fall time (up->down->up) due to its gaussian-like shape. This may not be true with tiny output signals.
Anyway, the best op-amp I found out there at the time was the THS3202

from Texas Instruments so I went for it.
However, as it is a current-feedback operational amplifier, we had to take care of its inputs impedances which are quite low.
Therefore, this conventional op-amp based transimpedance amplifier wasn’t possible:

Moreover, as we needed a total gain of at least 100, because of the previously explained reasons, I had no other choice than to cascade three op-amps, each one of them having a 5x gain, adding up to a total 125x gain.

This instructable will attempt to show you how to make an animatronic doll controlled by a wireless nunchuk. This doll...